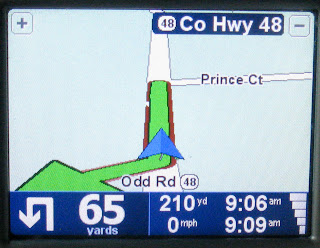 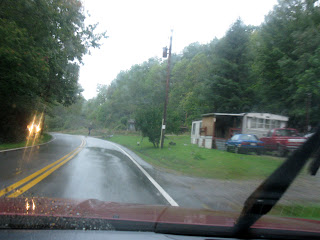 Odd weather we're having, isn't it? 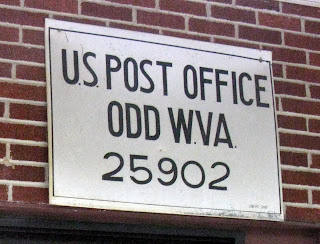 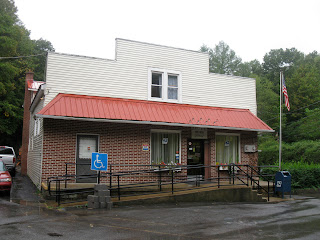 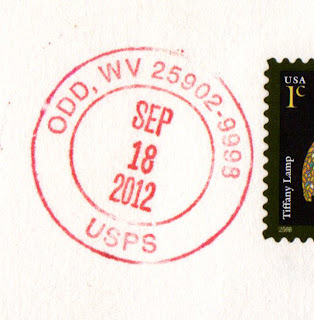 You get the Odd letter here every now and then. 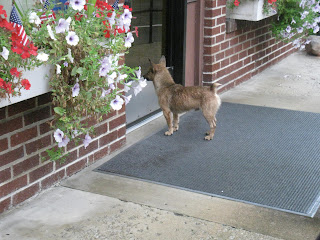 This Odd little dog was roaming around town. 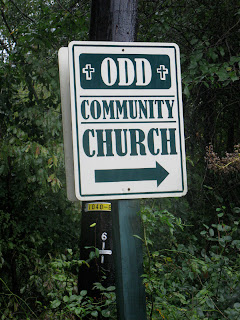 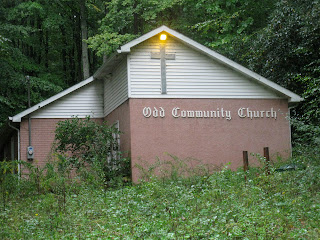 Odd and God: two great things that go great together 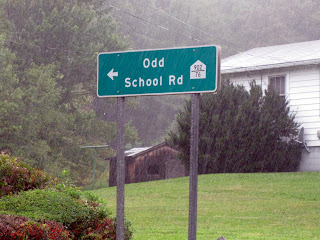 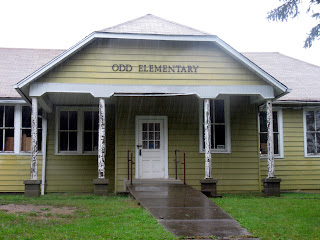 And I thought my school years were odd...

I love driving through tiny towns with unusual names that seem a million miles from anywhere just to see what they're like. On a recent trip, I had the chance to check out a town named Odd in West Virginia. Odd? Really? How very...odd. Wikipedia says the town got its name when a group of citizens met to come up with a name and after one suggestion someone said "That's odd". The town is actually not that far from civilization, actually; just a mere half hour's drive down Interstate 77 from the sizable city of Beckley in West Virginia's southeastern mountains, to exit 28 and then a right onto, yes, Odd Road. It's only about five miles to the center of Odd (the center of Odd? sounds like my life sometimes), but it seems further because Odd Road is a very windy mountain road where you don't go much faster than 25 mph, especially on a day as rainy as the one I had. You know you've made it when you get to the Odd post office (you can insert your own postal employee joke here), which is pretty much all there is to see, or so I thought. The p.o. was open and there was a delightfully friendly postmaster named Sue inside who cheerfully told me that they get quite a few curiosity seekers checking the town out, even from as far away as Australia. And she provided me with two treasured souvenirs: an Odd, WV postmark and an official Odd, WV post office ballpoint pen. Mighty neighborly in this Odd little place, I must say. She also informed me of two more Odd places to check out: the Odd Community Church just around the corner, and the Odd Elementary School, the last wooden schoolhouse used in West Virginia upon its closing in 1989. I couldn't tell if the church was still in operation or what kind of services they perform, but the abandoned Odd school looked like it was right out of a Steven King movie, especially in the driving rain of the day.

I really enjoyed being an Odd man out, and I hope to make it back some day, Odd willing.
Posted by Gunnar and Sherry at 12:03 PM

We'll have to do a meet-up in Boring, Maryland someday :)

I'd love that: "The Boring meeting will now come to order"...

I lived in Odd, WV from the 6th grade through graduation, looking at your pictures I realize the little "town" has grown. There was a little country store with a coal stove and a teeny little post office when I lived there. There were hollers I remember driving to a little Baptist church where there was a family (I won't mention the name) that had long been an incestual family - I remember one of the brothers chasing our car down the dirt road with an axe. It was beautiful there - our nearest neighbor I could only see in the winter when the smoke from their chimney raised over the mountain. I got my first and only taste of moonshine standing waiting for the bus at 6:30 a.m. to take me to Stoco Jr. High and a boy named JimJim let me drink from what I thought was his "7-Up" can, to take some aspirin for a headache - needless to say, after that drink, I didn't think of my headache, too busy trying to catch my breath. Thank you for posting the new "modern" Odd, WV pictures.

Terrific comment, Lisa. Really reads like the basis of a novel. Glad I didn't run into that family when I was there! Thanks for sharing.

Thanks for your comment, Marie. I really enjoyed my Odd visit and hearing from Odd people!

I was Lisa's best friend and was driving through that little town with her wonderful navigation skills. I saw that family and several others that scared me to death! After dropping her off, I went the long way home through Daniels around Snowshoe area!

I was Lisa's best friend and was driving through that little town with her wonderful navigation skills. I saw that family and several others that scared me to death! After dropping her off, I went the long way home through Daniels around Snowshoe area!

I live the old building it's really a great structures it's a shame that people have made it do awful however my husband and myself are needing a home. I'd like info how I could live there

That family are the Whitaker's.

It’s your roots, history, people. What sweet memories and thank you for sharing.

There's just been an update on the Whittaker's on the YouTube channel "soft white underbelly" in the last day or so. That lead me to wiki odd WV. Beautiful place. And the Whittaker's are imo good people. Someone needs to go to their house and help them out. In Australia, their called "carers". It's great to see their doing ok tho ..

Like to know the whitakers address ...wouldn't mind going up there to visit them..

Most remote areas have their anomalies from what we call normal.
As a child I knew of several inbread families in a town called Breakneck, PA, near 7 Springs Resort.

Johnny Wade passed away in March 2022